Fernando Trujillo has dedicated years of his life to protecting the endangered pink river dolphin of the Amazon. Winner of the Whitley Prize, his cause has gone global.

The recipient of the prestigious Whitley Prize in 2007 for his dedication to the plight of Amazonian river dolphins, conservationist Fernando Trujillo has taken his campaign for the protection of marine life to the world, using Colombia as an example of community-led initiatives.

Conservationists know him as Fernando Trujillo, but for the indigenous peoples of Colombia's Amazon, he is "Omacha": a dolphin who became man. Certain Amazonian cultures believe that river dolphins are shape-shifters and capable of taking up the human form. Others believe that river dolphins were a peoples long time ago and that each water mammal has the potential to turn back into a person anytime. Correspondingly, many tribes nestled along this mighty river believe that the spirits of drowned people enter the bodies of river dolphins. Some even believe that a person responsible for killing a dolphin will never have success in hunting and will always be punished by higher spirits. Sadly these beliefs don't protect river dolphins from settlers and commercial fishing operations.

As the founding partner of the Omacha Foundation (a Non-Governmental Organization dedicated to the study, conservation and protection of marine and terrain wildlife in Colombia), Trujillo graduated with a Bachelors Degree in Marine Biology from the Jorge Tadeo Lozano University. He holds a Masters in Environmental Sciences from the University of Greenwich (London) and a PhD in Zoology from the University of Aberdeen (Scotland). He is the main researcher of the projects that are carried out in the Orinoco and Amazon rivers. He has extensive experience in research and conservation of endangered species, with emphasis on aquatic mammals.

Ironically, when Trujillo finished his Masters degrees from the Tadeo University and decided he wanted to work with dolphins, he still wasn't aware that there were dolphins in Colombia. It wasn't until his first visit with Jacques Cousteau that he was able to map out a mission for this life. "There are river dolphins in Colombia and nobody is doing anything to protect them," Jacques Cousteau told him once. 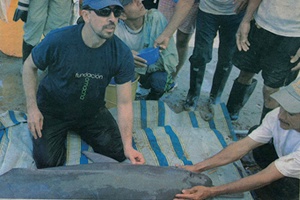 Trujillo took these comments from the world famous environmentalist to heart, but was really only familiar with the dolphins that inhabit oceans. He kept thinking: "Can there really be such a thing called river dolphins in Colombia?." It was shortly after that when he took his first trip to the Amazon. He sat on a boat in the middle of the river at 5 am, surrounded by thick fog. He stared calmly through his one foot window underneath the cloudbank. As he was staring at the horizon something unexpected happened. A fleet of river dolphins shot to the surface and flew through the air. They then came back jumping between air and water. It was at this moment that Trujillo finally realized that Cousteau was right: there are river dolphins in Colombia, and due to overfishing and pollution, they needed to be defended.

The threat to these magnificent creatures in Colombia has changed over time. In the 1960s dolphins were being caught on a large scale by artisanal fishing nets. The rise in dolphin deaths came as electrical power was installed in thousands of small isolated communities in the Amazonian basin. With the first refrigerators, fishermen could catch more fish than they could eat. Sadly, by freezing fish, they went for more, entangling more dolphins in wider nets. The population of river mammals began to sink. As highly adaptable creatures, dolphins learned to jump the nets and would bite into the trapped catfish. Dolphins were considered a nuisance and in the fight for food between man and animal during much of the 1990s, man was exterminating this spiritual guardian.

The fisherman of Puerto Nariño, Amazonas, were tired and frustrated by the dolphins eating away at their livelihoods. They decided to hold a meeting as to how "best" deal with the river "pest". Trujillo turned up and remarked to the locals: "You are right, let's go and kill all the dolphins!" This comment from a Bogota-based environmentalist shocked the fisherman. They were caught so off guard they actually argued against him, in favor of their aquatic companions, admitting that they needed urgent problem solving. Unfortunately the peril to the dolphins didn't stop at this Colombian river port. Many river dolphins are still deliberately killed and used as bait for catching large river fish. The tragedy is a striking example of the many unsustainable fishing practices that threaten two of the largest river systems in the world: the Amazon and the Orinoco.

Luckily for the Amazon and Orinoco, Trujillo won the 2007 Whitley Gold Award (The Environmental Nobel Prize). This award led to valuable sponsorships from companies like Hewlett Packard. After winning this award, companies rallied to Trujillo's projects. In September 2007, Trujillo with the help from other scientists, the Faunagua Foundation (Bolivia) and Omacha Foundation conducted South America's first-ever river dolphin census through the Amazon and Orinoco Rivers and its tributaries. During this census they counted 941 pink river dolphins on the 600 km stretch of the Itenez River in Bolivia.

Trujillo's life in an Amazonian dugout isn't padded by a red carpet. He has had to come into contact with many of the armed groups who operate in the remote corners of the country. In Puerto Carreño, Vichada, two guerillas approached him one day on a dock and asked him to follow them. They had some pressing questions. "Are you the guy who is working with the locals to help the dolphins?" "Yes," replied Trujillo, trying not to let the fear flash too brightly across his face. "We just saw about 20 of them up river, you might want to go and take a look." Trujillo was stunned by their remark. It seemed that despite the conflict, Colombians, like these armed inhabitants of Puerto Carreño, are concerned about the future of their rivers and rainforests. A love for homeland is one of the main motivational forces behind the Omacha Foundation.

One of Trujillo's endearing traits in that he is a realist. He knows that it is impossible to tell subsistence fishermen that they can't fish because it creates problems for marine mammals. Instead, he looks for compromises. One example of this was to start an organization in Puerto Nariño dedicated to making burgers out of the catfish bitten by dolphins. Known as the Association of Amazonian Women Fish Processors – Asociación de Mujeres del Amazonas Procesadoras de Pescado– the Omacha Foundation helped get the entity operational, and today, some 13,000 hamburgers are sold each month to school restaurants, prisons and hotels in Leticia, providing an income for families and supporting the conservation of river dolphins.

Trujillo's plan for dolphins didn't stop with the processing plant. He took on exhaustive surveys asking Leticia's hotel and tourism operators what the primary purpose of the 28,000 arriving tourists every year was. In a town, which depends on the river, 94 percent answered, to see dolphins! These tourists left U.S $7 million each year in income to the capital of Amazonas. If you subtract the dolphins from the numbers, Leticia would only receive U.S $420,000 a year in in-come from visiting tourists. According to the estimation of the number of dolphins near Leticia, each live dolphin pumps US $20,000 into the local economy. Trujillo is a firm believer that no project aimed at animal conservation can be successful unless it takes into account the economic well-being of the locals.

With a dollar value of what's at stake in the Amazon's tributaries, a guide program was set up to take advantage of the regions precious living resource. Fearing that large amount of tourists visiting the area in fast boats could injure the dolphins with their propellers, the Omacha Foundation is helping promote dolphin watching from wooden canoes using local guides. The community of Puerto Nariño counts with a set of beautifully-carved wooden canoes, painted by Tikuna children to look like Amazon animals; a river dolphin, a caiman, an anaconda and manatee. The canoes may be fun to look at, but like other Fundación Omacha undertakings, they convey a powerful message to communities: conservation is good for business.

Being careful not to make the animals above water seem unimportant, Fundación Omacha set up their third post, the Bojonawi Nature Reserve, to protect the diversity of land life. Bojonawi covers much of the great Orinoco River basin. Originally created through a strategic partnership between WWF Colombia, Hewlett Packard and other organizations, the Bojonawi Reserve is considered an important area for conservation of the endangered jaguar. Colombia's eastern plains are considered to be among the number one priorities for census, ecology and conservation of the jaguar.

Due to numerous attacks on livestock by jaguars, many ranchers from the neighboring Brazil and Venezuela have hunted the jaguar to the edge of extinction. If conservation Omacha's work proves successful, some of these animals will make a comeback at Bojonawi. The NGO is also working to conduct a population census of river dolphins along India's majestic Ganges.

Fernando "Omacha" Trujillo's accomplishments are many and globally recognised. His love for nature, his belief in working locally and acting globally, had led to team collaborations in Cambodia and Malaysia. On the front lines of Colombian conservation, the Omacha Foundation is this century's champion of river life and crusaders for community-led initiatives. With Fernando's unwavering dedication, dolphins have a better chance for survival, and this in turn, means hope for our planet.